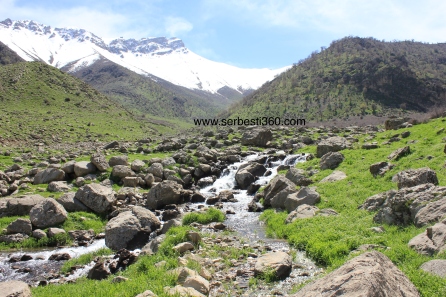 My visit to Kurdistan in spring 2015 has been great. I was able to travel to many historical destinations and really got to experience the Kurdish way of life whether that was through food, culture, fashion or by visiting mountainous regions of the country.  I was able to take many photos and videos and I really wanted to capture every moment that I could.

Today I will be sharing with you guys photos of a very special place. A place in which I did not know existed until I became a part of my in laws. I was able to visit a mountainous region of Sargali, Kurdistan in Bnary Qandil.

This has to be one of the most beautiful places I  have ever been. From the moment I sat in the back of the pick up truck dressed in full Kurdish attire I could not help be feel everything around me. I connected with the nature and the air felt different to me. It was as if I was reborn again.  I was stunned by its beauty, natural foods and springs.  As we explored the area I came to learn the history of this beautiful place.  I came to learn that the area is family land which has been paced down for generations.In fact, this area once inhabited people. It was a small village in which the family used to go during the hot seasons of the year.  I learned about two spring waters that were used long ago as places where men and women showered;  Kani Jinan (Women’s spring) and Kani pyawan (Men’s spring). A room was built round each spring creating privacy for both sides. Another interesting fact I learned during my viewing was how the place got it’s name. The name Sargali is broken down to two terms, a)  sar which means “on top of”and b) gali which  refers to two mountains beside each other and a valley goes in between. Therefore, Sargali is the place where two mountains are beside each other and  that a beautiful spring valley goes through the middle.

During Saddam Hussein’s Ba’th Party period, the area was destroyed. Homes were burned to the ground in 1977 by Iraqi government and people were kicked out out the area. Ultimately families were relocated to the outskirts of Hawler (Erbil), Kurdistan near Persin.

As I was climbing the area to make sure I capture every corner , I felt so energized. The area really gave me energy and it felt good to be connected with natural life and my roots. It was full of life, as if the river was speaking to me. At times I wondered off thinking about how life was and how people actually lived a great life in this area before their homes were destroyed. Now just the remains of some homes were left (rocks pilled together in certain areas). As I was taking my photos I continued to stare and wonder what if the Iraqi government never raided this place, how would life be here? would people still be living in this area if they were not forced to move out?

I appreciate all my visitors. Please come back and visit my site often. All the best!
%d bloggers like this: